Store Bought Pillsbury Pizza Dough (or make your own)

OR (FOR HOMEMADE SAUCE)

1 14 Oz Can of organic Crushed Tomatoes

Start it off by cooking up your sausage. When your sausage is nearly cooked, add in the pepperoni and cook it up for a minute or two more until all the meat is cooked through. Drain off the fat.

Now add in the garlic, basil, oregano, and onion and let it all heat up for a good two to three minutes. Finally, add in your frozen spinach and let it cook up and get hot. Remove the mixture from heat.

Grab your dough ball, rip a good sized piece off and roll it out about 1/4 thick. Grab your filling and spoon in a few decent sized spoonfuls. Be sure to leave enough room to fold it over and seal up your edges.

Fold the dough over your topping and seal the edges up. I rolled my edges into the top to seal it up. Be sure to cut a few slits in the top of calzone so that steam can release as it cooks in the oven. And this is optional, but I also brushed some egg white on the tops of these beauties to help them get a nice golden brown color in the oven.

Throw them in a preheated oven set to 425 for 15-20 minutes or until the top is a nice golden brown. I cooked mine on a preheated pizza stone to ensure the bottom had a nice, crispy crust.

Add to your saucepan the tomatoes, onion powder, oregano, salt, olive oil, garlic and basil. Stir it all together and let it heat up.

Helping Someone After a Miscarriage

When we offer help to someone through this time, they are often in such shock they don’t know what they need. The objectives are to encourage the venting of their grief and re-establishing their self-esteem while recognizing their sorrow. Whatever the person is feeling, they deserve to have their feelings supported by the people around them. If you are their main comforter, see the following website for suggestions on how to be the most useful companion to a grieving person; www.centerforloss.com/companioning-philosophy.

Seven things not to say

If in doubt, say something – anything – and be prepared to listen. Possibly the hardest thing, even harder than hearing an insensitive comment, is when people say nothing at all.
(The Seven helpful things to say and Seven things not to say lists are compiled from information courtesy of the Wellington Miscarriage Group)

Rinse sweet potato and poke holes in it using a fork. Microwave for 12 minutes, until cooked through.

Peel potato and place in a large bowl. Smash using a potato masher until smooth.

Vanilla Sauce: Whisk together all ingredients in a small bowl. Pour over warm bread pudding. 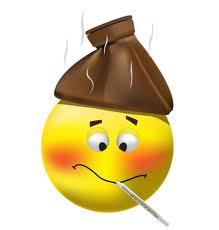 I have been under the weather since the weekend, as I developed a nasty head cold.  I knew on Thursday of last week that something was a bit off because my throat was a bit scratchy.  I ended up with a fever and heavy congestion and a bad cough.  I went to the store on Friday morning and grabbed Mucinex and some Aquaphor to put around my nose to avoid having chaffed skin which looks like a mustache after several days of blowing my nose.  I slept all day and most of the day Saturday.  Sunday, I went to Walmart and got a Vicks vaporizor, since mine is in a box somewhere.  It really helped me to be able to breathe.

Once I was able to finally sleep somewhat peacefully, after the cough drops kicked in to keep the coughing at bay, my mom came to check in on me and woke me up.  She asked if I needed to go to the hospital !!  For a head cold, Mom?  Really?  Of course, I was not able to fall back asleep once she woke me up.  Moms !  lol

Fast forward to the past two days, I am swigging down Nyquil Cold and Flu like it is moonshine !  It seems to be helping, as my nose is no longer running and the coughing is at a minimum.  Now if I could clear my sinus passages I would be great !

My menses STILL have not resumed and now I am not even having the mild cramping.  I was freaking out about it at first, but now I could care less.  It can come on when it gets ready or just skip this month all together.   I was reading that women who are going into perimenopause start having 40+ day menses about two years prior to the onset of menopause, so we shall see.

I have no barometer because most of the women in my family had hysterectomies and my mom hit menopause in her early 50’s.  I am not sure if it is my bodies reaction to stress or possibly all the meds I have been taking back to back for a over a year for IVF procedures.

On the stalker front, this morning, I was looking for a phone number for the trash service company on my mom’s cellphone and noticed a new message on her Facebook app.  The icon was the same of one of the alias pages my stalker created to defame me.  I open up the message and this crazy woman has written my mother a ton of lies and threats.  It is utterly ridiculous, as my mother knows me like no one else and can pinpoint what a conversation with me would sound like.  Cristal has truly proven to be beyond insane and now has my close friends worried as they are certain that she wants my life and is fixated on me to the point that they feel her harassment and stalking will go beyond cyber stalking and may present in real life.  Her actions are deplorable !  She wrote in her post that she hopes they have chemotherapy in Federal prison because my mom and I can share a cell.   Really?  WHO does that?  And in what rational mind would it ever be a thought that I would be found liable for putting an end to someone’s attempt to defraud innocent people?   Is $2700 or so THAT damned deep?  Obviously it was a lifeline to her !   I truly do not get what purpose she feels she is serving by inboxing my mother that crap and calling my sisters whores and crackheads.  My sisters are magna cum laude graduates of Howard University and one is Yale Fellow !   They are both happily married with children.  I have NO idea where she is dredging up even the forethought to create this horrendous reality she has created in her mind for me.  It would make for a great feature film, but sadly is not any resemblance to my life !

I am completely pissed off that this idiot is using social media to attack me, my business, and my family for absolutely no reason and with malicious lies and drama.  Who has the time to sit around and think about me all day and night?   Twitter closed her page and I have filed a report with Facebook.  If they have not voluntarily shut her pages down, I am certain that the FBI Cyber Stalking Task Force and NYPD certainly will.

Of one thing I am grateful, that I am not currently going through an IVF cycle.  This added stress would not be good.  I will be glad when this is all behind me and hopefully will culminate with Cristal behind bars and seeking the psychological help she desperately needs.  What is scary is that she has been flying under the radar all these years.  She started as a Facebook fan and she would come out to the soup kitchen to volunteer alongside me with my other “fans.”  She then started attending meet and greets I hosted around the city as I would invite my fans to come out to meet me.  When I learned she attended Howard University, I thought, oh, she is cool.  She came to a few parties I held at my home or other venues and we talked on the phone off and on over the years.  What should have rang a bell is that my ex-fiancee nor none of my friends could stand her.  They all got weird “user” type vibes from her.  I was not around her enough, but I knew I did not like her negative disposition on everything and she was too “pro-black” for me.   For that reason, I never brought her into my inner circle.  When her son died, I, as most humans would, felt horrific for her and I was also in my feelings regarding the upcoming anniversary of my own loss.  Never in a million years did I think having her any where near me would devolve to this chaos.

On the Grandmother front, we got notice that my grandmom’s sister called in pretending to be my grandmother to the Social Security Administration and attempted to have my grandmom’s check mailed to her home and pulled it off of direct deposit.  My mom and I drove to SSA and they are making my mom administrator over my grandmom’s account and not even my grandmom can make any changes now.   Her sister also called the NC State Retirement System and lodged a complaint that “someone” was stealing my grandmom’s retirement check !  My mom is administrator now over the retirement account as well and no changes will be allowed without my mom’s express consent and a password has been placed on the account so that she can be verified.  I am still in shock that there are people that vile and evil in this world.  Who wants to take an old person’s money?  WHY?  I am so thankful that my mom has always taught us to have integrity and to be GOOD people in light and in darkness…when seen and when it can not be seen.   I had a sneaky suspicion that my aunt was after my grandmom’s money and it only took two days for God to reveal that.  I wonder how long she will keep my grandmom in SC once she realizes that her money can not be touched?  God has a way of revealing snakes in our lawn, does He not?  🙂