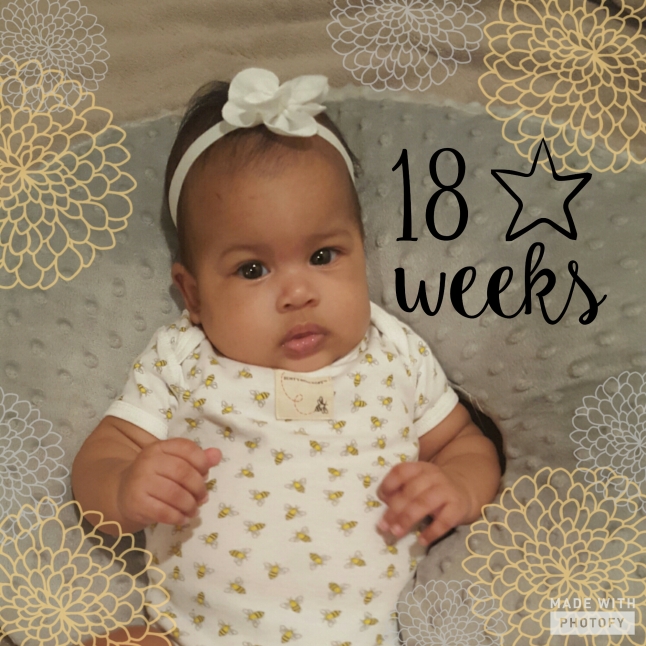 On the day my baby turned 18 weeks, at the exact hour, we were sitting in the Children’s ER getting dexymethasone for a Croup diagnosis.

My baby became increasingly hoarse on Wednesday and Thursday, so I text my sister, who is a Pediatric RN and she said the baby has Croup and to put her under the vaporizer and call her doctor the next morning and see for she should receive a steroidal breathing treatment. We were traveling back to the beach so when we got back, I put Vicks in the vaporizer and put her in the room with the door closed.  After a few hours, she became more audible  ( she sounded like a faint baby seal) and the coughing and heavy breathing lessened.  Her doctor called me back that afternoon and instructed me to take her to the ER because she was so young. The ER staff was really attentive and quick.

What a scary way to come down off the high of the week; baby girl  being handpicked to do a Target national print ad and having three agencies wanting to add her to their roster !  We are still holding out for the agency that my friend’s children are signed to, but they don’t usually take babies until they are six months.

While sitting in ER, another major agency called wanting to add her to their roster.

Because of these developments, we are going to have to stay within 2 hours of NYC. So…. back to up North we go for six months.  We are putting plans to go West for 1/2 the year on hold unless the baby can get the same number of gigs in LA.   The agency we are holding out for will exclusively rep her in NY and LA.
This week, my mom added a little cereal to the baby’s last evening bottle. It is helping her stay asleep without waking to eat in the middle of the night.